While sitting at my desk one day, I wondered how to model a spherical configuration of rounded gears (SCORG). Where does each gear need to be positioned? How should each gear be sized in such a way as to share the same diametral pitch with all other gears? How does the size of each gear affect the overall dimensions? Crappy sketches

gave me a way of visualizing what I had on my mind, but to figure out the math, I needed something significantly more absolute than “That look’s about right.” So, I turned to buckyballs. By pretending that the geometric shapes composing a buckyball are actually gears, I had a good geometric model of the SCORG.

Here are examples of a spherical configuration of circular, gear-like shapes and the buckyball which models it:

The picture above is of what I like to call a 5-4-3 buckyball (meaning one composed of 5-sided, 4-sided, and 3-sided polygons). While this has the potential to lead to a beautiful SCORG, there are just too many gears to create a real-life 3D model (my end goal). So, I decided to go with a smaller 5-3 model, having a total of 30 gears. This is the configuration I will show you how to derive throughout the rest of this post. Rejoice; it also happens to be significantly less complicated than solving the 5-4-3 configuration shown above.

How to Design a SCORG

The entire process of designing a SCORG is as follows:

This may sound complicated (and honestly, it probably is), but I will walk you through each of these steps in a (hopefully) understandable manner. If clarification is needed, please let me know in the comments.

It is important that the gears actually turn once the SCORG is assembled. To ensure that this happens, we need to select a buckyball configuration that will not gridlock. Gridlocking occurs when any given loop of gears contains an odd number of interfacing gears. For example, consider a loop of 3 gears. Suppose the first gear in the loop is moves counterclockwise. Naturally, both gears interfacing with the first gear must turn the opposite direction, clockwise. However, those two gears also interface with each other, and thus cannot both rotate the same direction. Since the gear setup requires the gears to rotate in both directions, motion is not possible. This is called gridlocking, and occurs in all loops containing an odd number of interfacing gears. For a loop of gears to not be gridlocked, exactly half the gears must rotate clockwise, and the other half must rotate counterclockwise. Obviously then, a characteristic buckyball should be selected so that all loops of gears contain an even number of interfacing gears.

As I mentioned already, I chose a 5-3 configuration for my characteristic buckyball (shown below). Imagining that the geometric shapes are gears which interface at the polygon edge midpoints, it can be seen that gridlocking will not occur since all possible loops contain an even number of gears.

Here’s a cover of The Economist. Do you expect this “global factory” to succeed?

We can simplify this process by combining clusters of polygons into a single, repeating polygon. The important thing is to make sure that this polygon has geometry with which to identify the positions of the center points of the original polygons in the buckyball relative to the center of the buckyball. In other words, this characteristic polygon should have a way of marking the angles of the original polygons. 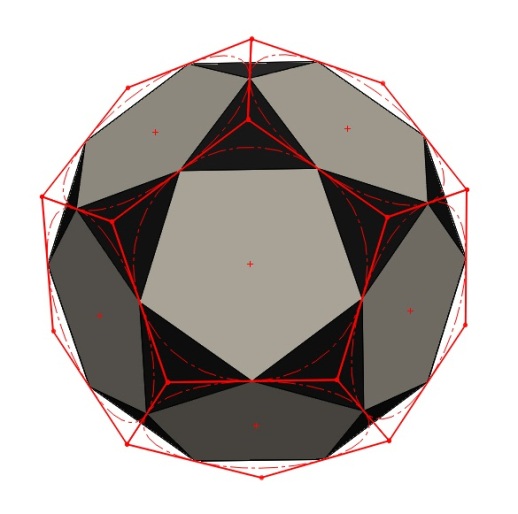 Now that we have chosen the characteristic pentagons to mark the angles between the SCORG’s gears, the next step is finding the radius of the SCORG.

Step 3: Finding the Radius of the SCORG

Since we are defining the positions of the gears composing our SCORG in terms of angles, the value of the SCORG’s radius doesn’t matter. The only things that matter are that (1) the radius is defined as an expression of the characteristic pentagon’s geometry and (2) that we use this radius expression consistently and appropriately during later calculations. 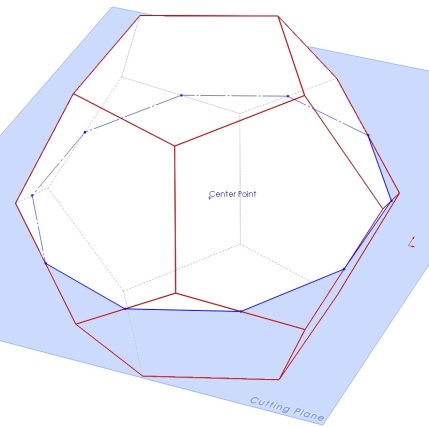 Looking at the decagon, we can find an expression for the radius, R_sph, in terms of the side length, L (an unknown function of the characteristic pentagon).

From the above image, it is easy to see that

Combining these equation to eliminate r, we have

This is the value for the SCORG radius in terms of the characteristic pentagon’s side length, S.

Step 4: Finding the angles between gears 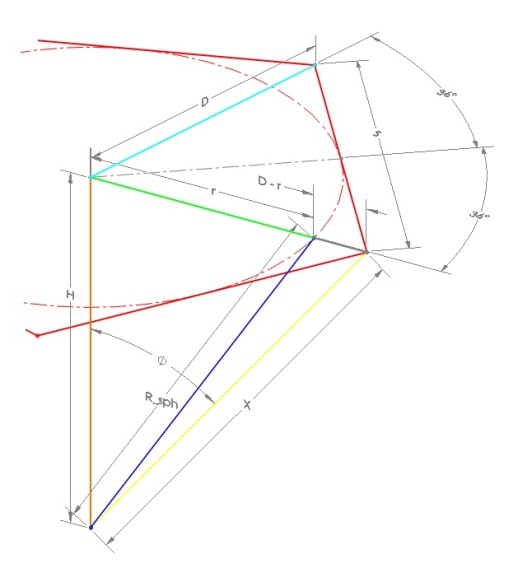 To find this angle (Ø), we need to know two values: D and H. Once we have these, we can use the inverse tangent to solve for Ø.

From the pentagon values, we see that

From earlier calculations, recall that

Replacing each of these variables in the equation for H, we get

Finally, we can finally solve for Ø:

Note that because both D and H include S in their numerators, this unknown value will cancel.

We now have the angles for each gear relative to all neighbors.

Note that the image above is labeled incorrectly. R_sph should be the dashed blue line rather than the diagonal blue line. Thus, the equation for β should be

We now have the angles for each gear relative to all neighbors.

Step 5: Finding an Expression for Gear Radii and Finding the SCORG Radius

Here is a diagram illustrating the radii constraints:

We can pull a few equations from the constraints depicted above:

(Note that the angle Ø is the angle calculated between the pentagon and the triangle, 37.37736814 degrees.)

We now have an expression for R1 and R2 in terms of the angles. We use this expression as follows:

As demonstrated, the procedure detailed above drives the radius of the SCORG. If the SCORG needs to fit in a certain area, establish the radius beforehand. Use the same procedure as above to find angle ‘a’. Instead of arbitrarily picking the radii, however, instead use the equations for R1 and R2 in terms of R­­sph. Note that this will likely give radii values for R1 and R2 that are more difficult to work with.

Step 6: Putting It All Together

The final step is to model or build the SCORG. On thing to keep in mind when building the gears: the gear teeth should slope radially outwards to ensure that there is not over/underlap of the the gear teeth.

Here is a SolidWorks rendering of the SCORG before adding the teeth:

Here is the final version with teeth:

I hoped you enjoyed this tutorial/derivation/explanation. If you have any questions, please let me know below. Thanks!

3 thoughts on “Spherical Configuration of Rounded Gears – A Derivation”